After months of Johnny harassing me on social media, and slandering me as a “racist” for having exposed the spyware and fraud that his Rank Math SEO shills were promoting, I decided to put this little punk in his place by revealing just how clueless he is in all things server-related. Like most WordPress “gurus” desperate for attention, Johnny doesn’t actually know any computer programming (despite falsely claiming to have a “computer engineering” degree on his public LinkedIn profile), and merely “shills” and promotes for other brands like Litespeed Technologies, Rank Math SEO, Swift Performance, and other junk aimed at bottom-shelf cPanel hosting. Like most shills, any advanced technology that Johnny can’t wrap his mind around — or who won’t agree to a “link exchange” — gets insulted and slandered.

Update June 2021: Johnny is now posting “anonymous” comments on his own blog accusing me of being a “Neo Nazi” among other smears. He doesn’t even have the balls to use his real name when he slanders a competitor, just goes straight to fraud every time… very illustrative.

Update Apr 2021: Johnny deleted the fake “review” of his service he posted on Reddit after getting called out.

Update Sept 2020: It gets even better… Johnny Tsunami, the grand master guru of WordPress development and web hosting technology, has exactly zero contributions on GitHub.

Here’s a brief review of Johnny Nguyen, a small-time Vietnamese-American shill in the WordPress community who suffers from short-Asian-guy-with-a-small-penis-so-I-hate-all-white-people-because-white-girls-won’t-give-me-a-chance-even-though-I-know-karate! syndrome, and his junk web hosting services (!).

Nguyen, a wannabe Muay Thai boxer from Los Angeles, has tried hard over the past few years to market himself primarily on Facebook as (yet another) WordPress/SEO guru… apparently after he lost one-too-many boxing matches (I’m sure every white boxer that pwned him was also “racist”). 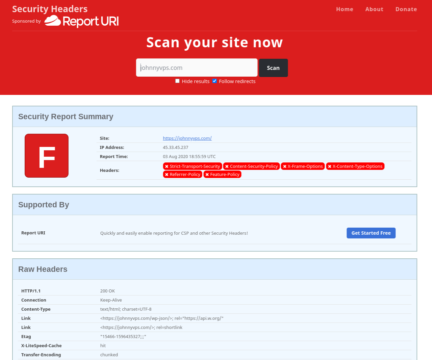 Unfortunately, as with most “gurus” who seem to spend most of their time on social media, Johnny doesn’t seem to actually know anything about web programming, Linux system administration, or DevOps in general. On LinkedIn, he even lists his Bachelor’s Degree from CSU Northridge as “Business Marketing”… which doesn’t even exist in their Catalog of degrees and programs! To make things worse, he says his program included an emphasis on “psychology” and “computer engineering”… which clearly, is completely concocted. In Johnny’s defense, however, he does appear to have earned a “LiteSpeed” achievement certificate from cPanel, so perhaps he thinks creating an email address in the cPanel UI while wearing his boxing gloves counts as “engineering” expertise…

For example, despite aggressively promoting his “JohnnyVPS” web hosting service as a VPS server provider, LittleBizzy previously exposed the service as being merely a shared Litespeed server running cPanel/WHM software. It is not only “not” a VPS provider as Johnny claims, but it is also one of the most bloated and unstable stacks you could choose when it comes to scaling high-traffic WordPress websites while avoiding common security exploits like .htaccess redirect hacks, etc.

Nguyen’s own homepage (above), is also graded a failing “F” score by SecurityHeaders.com, while DomainTools reports at least 51+ different websites are sharing that same non-clustered cPanel server in California…. thankfully for Johnny, none of his projects have to worry about traffic load or scaling, apparently, because they are all low-traffic. I also wouldn’t be surprised if a local business from Europe or Asia got on his cute little overloaded shared server and had their SEO rankings immediately tank… yucky.

To make matters worse, Johnny doesn’t even know to deny access to xmlrpc.php requests to avoid DDOS attacks for his clients, not to mention rate-limiting or blocking access to wp-login.php.

I discovered all of these glaring features in just a few minutes, there are likely dozens more examples of poor decisions and incompetence waiting to be found.

I usually pick on people my own size, but sorry Johnny boy, you had this coming… you complete fraud…

P.S. …you’re welcome for the free audit of your website! maybe time to pick up swimming or something?